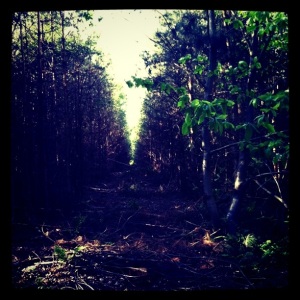 So, last night, I decided to try and get lost. Nothing serious, just an attempt to find myself in mild but slightly enjoyable peril.

The venue was the local jungle. Alright, forest. Alright, collection of trees opposite Harlestone garden centre. Anyway, minor details aside, I set off with my four-legged friend, eager to tread new ground, forge footpaths and generally pretend I was in search of my imaginary comrades in a remake of Platoon.

I’ll tell you this. It’s near impossible to actually get lost. Try as I might, I simply couldn’t manage it. And I did try very hard.

There were moments of hope. Finding myself in an unfamiliar clearing surrounded by tall trees, I headed – not for the manmade footpath, oh no – but for what looked like a path smashed into place naturally by fallen branches and large bits of tree. What would it lead me to? A forgotten land? Narnia?

It took my just a few yards to realise that what I’d actually entered was not the work of mother nature but a carefully constructed route for the transportation of fallen wood to the giant timber merchant. Which was just around the corner.

In fact, I couldn’t escape from civilisation. Later on, I headed deeper and deeper into the wood. Further than I’d ever been before. The trees overhead grew more dense and, in turn, the ambient light faded, as did the background sound of the A45. At last I was in with a chance of being lost. I began to spook myself out by thinking about the Blair Witch Project; the distant sound of crying babies and snotty-nosed, whimpering monologues. I got my compass out and quickly realised I had no idea how to use it. That didn’t matter. In fact, it helped. I had no idea which way to go.

A quick glance at my phone yielded yet more eerie pleasure. Moments before, I had a very un-Ray-Mears-like access to a full 3G signal (I think there may even have been a WIFI hotspot available) and the entire world in the palm of my hand but now, it simply read ‘No service’. No phone. No texts. No Facebook status update notifications.

I was alone. Cut off from the rest of the world.

“Come on, Thomas. Keep up!” A family of three – mum, dad and small boy clattered past on their post school stroll.

I can’t remember that happening in Predator.

To make up for this crushing dose of reality, I briefly considered wandering aimlessly across an adjacent field but conceded I’d simply end up at the local Co-op which I knew was just over the horizon.

It was time to give up.

So I went home.