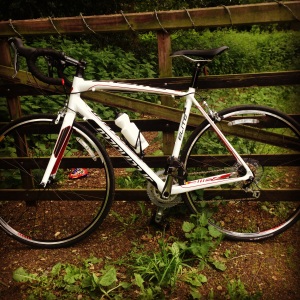 There’s nothing like feeling out of your depth, particularly when you desperately want to feel entirely comfortable.

I immediately knew I was swimming against tides far bigger than my assumed Wiggins status when I looked to my right in the bicycle shop. Leaning gently against the wall was a piece of metal. This particular piece of metal had been formed into the shape of a bike frame. Only, it was missing literally everything that would justify anyone referring to it as such an instrument. There were no wheels, no pedals, no gears, no brakes. There wasn’t even a bottle holder. Or a bell.

Regardless of these glaring omissions, a price tag hung from the gaping hole I assumed the seat would normally fill.

At this point, I was halfway through buying my own road bike (wisely, I’d picked one that had all the bits our friend on the wall so badly needed), and it was also at this point that I realised I was entering a world I was entirely unfamiliar with. I’d never spent the kind of money I was laying down on a piece of aluminium and rubber, but I certainly wasn’t in the league that clearly existed for super bikes.

Fast forward a month. I’m very much enjoying my road bike. The ease with which it glides up hills and the almost eerie lack of any discernible weight make this thing part of me, an extension of my body. We’re connected. As one. It does what I tell it to and, together, we coast down empty country roads, duck under low-lying branches and set off the odd speeding sign.

I am Bradley Wiggins.

Then I decide to take a drink, fumble the bottle in an entirely un-Wiggins like fashion and watch as it falls from my grip and heads silently towards the tarmac below. Then, obviously, I run over it.

Forgetting my feet were effectively glued to the pedals via NASA-grade straps, and in an entirely justified state of shock, I very nearly sent my expensive bike crashing to the ground as I attempted to release my right front from it’s cage. Thankfully, that didn’t happen, and I managed to clumsily turn myself around in time to watch the water I would so badly need in ten miles time gushing into the drain at the side of the road.

Knowing that releasing myself from the bike with such an epic, Tour De France regulation seat height was near impossible without pulling a muscle, and that re-inserting my feet into the pedals would take around twenty minutes, I elected instead to walk myself and my trusty steed, Flinstones-style, to the scene of water bottle decimation. It was an undignified retreat from my intended course, and doubtless broke every Olympic road biking regulation going. No one was watching, though, so my blushes were saved.

The bottle was slightly contorted, scuffed and, more importantly, completely devoid of any liquid. I thought back to that four grand bike frame. I bet the person who bought that never drops their bottle.

I pedalled on. Slowly.